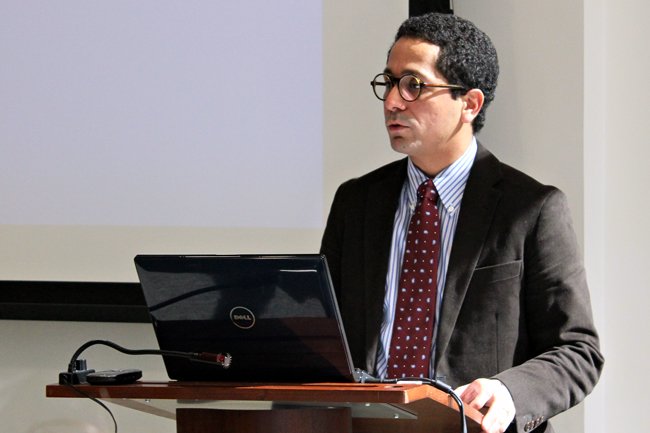 “Autobiography of a Brown Buffalo,” which Chicano author Oscar Zeta Acosta published in 1972, is an indigenous ecological migration narrative written in response to growing environmental threats of the 20th century, Garcia said in a talk on-campus Wednesday. These threats included uranium mining, food toxicity and pesticides that destroy the natural landscape, and had repercussions for all human beings, Garcia said.

“Humans exist by nature within ecologies, and, when your ecology is compromised, toxicity, disease and ecological destruction affects your body,” Garcia said. “It causes a feeling of existential vulnerability.”

Garcia discussed how “Buffalo”’s main character, Oscar, escapes the toxic wasteland of his city to travel to the Southwest region the United States in search of his Chicano identity. During his travels, he turns into a buffalo and interacts with a host of Native American animals. Through his experiences, Oscar acquires an appreciation for the environment.

Acosta deliberately makes his characters unusual to keep things interesting throughout the story, according to Garcia.

“He turns into an animal and explores the ‘wild west’ with a motley crew of degenerates,” Garcia said. “It must allow for aberrancy, contradiction and complication, and that’s precisely what Acosta deals with.”

Those in attendance included Pauline Strong, anthropology and women’s and gender studies professor, who said she had reservations about grouping all indigenous Native American cultures under one heading.

“The concept of indigenous is a very broad one, intended to highlight the similarities among groups of people who have a precolonial history to a landscape, and highlighting those similarities builds an international coalition,” Strong said. “But, in doing so, I think it’s important to be aware of the specificities of each group, culture and relationship to each environment.”

“The book is a good example of literature and poetry with the agenda of getting people to stop worrying about their individual identity and personality,” McMahon said. “It fosters in people a sense of familial responsibility for the entire world and all life on earth.”

Posted on February 3, 2015 By JMFitchFound
Categories: ALL THEMES