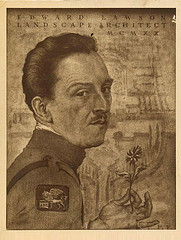 James O’Day is the recipient of the 2012 Kress Mid-Career Grant for his project Continuum of Classicism Edward Godfrey Lawson’s Photographs and Studies of Italian Renaissance Gardens and His Enduring Legacy to American Landscape Architecture, 1915-1937. The project examines Lawson’s historic role in the promulgation of Italian Renaissance garden design in relation to broadening the canon of American landscape architecture during the first half of the 20th century. Research findings will be developed into a digitally published article and a supplemental digital compendium compiled from his historic photographs and artwork.

Lawson was awarded the first-ever Prix de Rome in landscape architecture by the American Academy in Rome. During his fellowship from 1915 to 1918, he conducted a photographic survey documenting Italian Renaissance gardens of the 15th and 16th century. He canvassed the Italian compagna, recording seminal gardens from the cinquecento and seicento—an unprecedented event for a formally trained landscape architect.

As a professor of landscape architecture at Cornell University (1922-1937), Lawson further promulgated landscape design principles of the Italian Renaissance. His research, and that of his peers, was influential in developing landscape curricula used by American universities for the next generation. Yet by the mid-1930s, new leadership and new approaches in landscape training—the advent of modernist principles—de-emphasized the influence of classicism and devalued the works of Lawson’s generation.

This project will address Lawson’s historic legacy—his grafting the idioms of Italian Renaissance garden design into the American landscape tradition.

Illustration of Edward Lawson. Courtesy of the estate of Frank Perley Fairbanks.